Under 8 Player of the Week

Finn Tierney is the Under 8 player of the week. Finn trains really hard and has turned in some great performances at the small sided games at the Red High with 4 great goals against Portaferry, Drumaness and Celtic Bhoys.

On Saturday 10th Feb, Rossglass County F.C. helped the shoppers in ASDA Downpatrick bag their groceries in return for a voluntary donation.

We’d like to say a very big thank you to ASDA for allowing us this valuable fundraising opportunity and to the players, coaches, committee members and volunteers who gave up their spare time to help out. We really appreciate it.

The bag pack was a great success and all funds will go towards our development fund. The only complaint on the day was that Trish who put in a 4 hour shift never received her costa coffee! 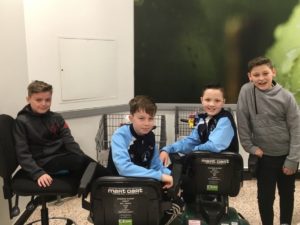 Rossglass County’s “little nippers” took to the field on Sunday as part of their continued football development. Too young for the small sided games at the Red High, Celtic Bhoys F.C have introduced a great new initiative to get our little ones playing football against other teams.

Five clubs took part in a three hour extravaganza on the 3G pitches at Downpatrick Sports Centre. Including ourselves and Celtic Bhoys there were also teams from Newcastle, Ballynagross and Crusaders from the Irish League.

The boys and girls of Rossglass thoroughly enjoyed themselves and our two teams turned in some fantastic performances. Conor Bradley, Ben Ford and Sé Tumelty had a field day in front of goals while Ethan Murphy, Tom Kelly and Fionn McCargo were steadfast in defence.

Due to the outstanding success of this initiative the “First Kickers” will continue at the start of each Month.

If you want to see just how much fun the kids had…just watch our video on the website or on our youtube channel and don’t forget to share it with your friends and family.

Winner of our Signed Liverpool Shirt!

Rossglass County 2012 team (aged 6 and under) pictured with Caoimhe Bradley, along with the signed Liverpool shirt she won in our recent draw. Also pictured is her dad who we believe is a Manchester United fan!! Interesting….

Huge thank you to Liverpool Football Club for kindly donating it to Rossglass.

We would also like to thank all the players, parents and volunteer raffle sellers who sold and bought tickets for the draw. The raffle wouldn’t have been such a success without your support! Thank you.