On Saturday, 4th August 2018, Rossglass County will be holding their inaugural Football Tournament and Charity Fun Day at the Red High 4G pitches in Downpatrick.

The Tournament is open to 2012’s, Under 6 (First Kickers) and 2010’s, Under 8’s and will be divided into two sections – blue and green. Rossglass County’s philosophy has always been about giving all kids the chance to play football no matter what their ability and we hope this tournament will allow the boys and girls, to play in a fun and enjoyable environment.

With that in mind, we thought why not have a “fun day” to go along with the football –  there will be more than enough to keep the kids and their families entertained when they’re not on the pitch from bouncy castles to face painting and we’ll top it all off with a summer barbecue.

The Tournament is limited to 24 teams in the First Kickers section and there will be specially commissioned commemorative medals for every player, so please register your interest as soon as possible. Irish League champions Crusaders, East Belfast and Glentoran have already booked their places.  The cost per team is £35  and you can pay your registration fee here or click on the blue button.

Part of the proceeds raised on the day will be going to TinyLife. Northern Ireland’s only premature and vulnerable baby charity. 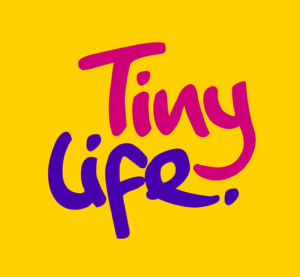 We hope to see you there for what’s going to be a great festival of junior football fun while also helping TinyLife provide practical and emotional support to the families of babies born too soon!

All Roads lead to the Rossglass County AGM 2018

The club is keen to involve as many people as possible in the running of our club. We wouldn’t exist if it wasn’t for the volunteers who freely give up their time to provide football to all our kids.

We invite players, parents and guardians, members and non-members to come along and have your say on how the club goes forward. We would be delighted to see as many people as possible there on the night.

Your club, Your kids….have your say!

Well done to Rossglass County Under 15’s on winning the DYL Cup for 2018.

In a tense affair against our neighbours Coney Island the game finished 2-2 with Coney Island equalising in the last few minutes. Heartbreak for  the young county team to concede so late on but they had to pick themselves up again as the game went straight to penalties. 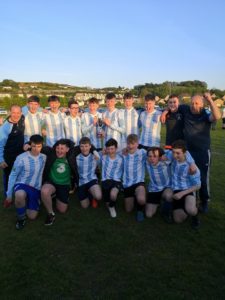 Fionn McCall and Christopher Walsh got the goals in the 90 minutes for Rossglass while goalkeeper Lorcan Ritchie pulled off some great saves. County went on to win 4-2 in a gripping penalty shootout. Watch the final penalty and the wild celebrations here.

Captain Fionn McCall was fabulous for County and all his efforts were rewarded when he lifted the Cup and the man of the match award.

Well done to all the lads and in particular to the coaches Darren Teggart and Harry Walsh for guiding this young County team to success.

Each year Rossglass County FC present the Jordan Murdock memorial trophy at our annual awards. Jordan was a very promising young footballer for our Under 15’s when he tragically lost his life in 2004.

The trophy is awarded to a young player who achieves something special during the footballing season.  This year the trophy went to Keeley McCullough. Keeley was the only girl in our Under 8 team this year but competed on a level par with the boys. She captained the team on many occasions and even went unbeaten in one of the mini soccer mornings at the Red High.

Keeley is very popular with all her teammates and is a worthy winner. Well done Keeley, well and truly deserved.

Rossglass County FC held their end of season awards at Denvirs Hotel, Downpatrick, Saturday 12th May. It was a great occasion and celebrated the success of the club and players over the past 10 months. The club would like to thank Denvirs for their hospitality and looking after us so well on the night.

The award winners on the night were presented with their trophys by Ollie Burke, Firsts Manager and Club Chairman:

Marc Burke, Top Goalscorer and Young Player of the Year. 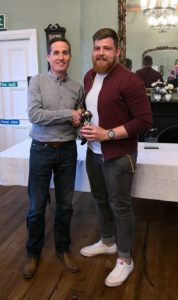 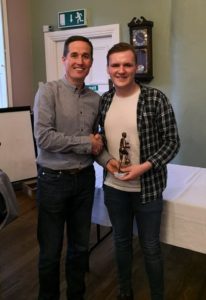 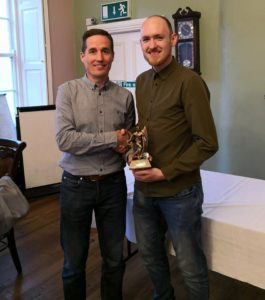 Well done to all the players in particular the prize winners.

Winners on the night were: 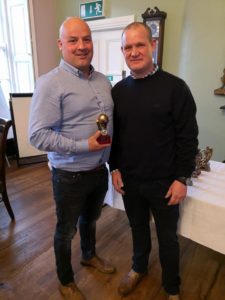 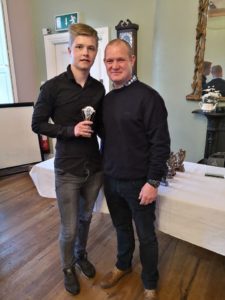 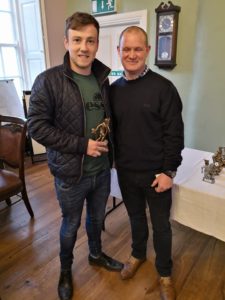 Club Person of the Year Award

Danny McGarrity presented Fintan Bradley with the Club Person of the Year award at the club’s annual presentation night which took place on Saturday 12th May. This was in recognition of his work for Rossglass County FC throughout the year. Well done Fintan, thoroughly deserved.

Rossglass County Under 11s’ lost their Shield Final to a strong Ballynagross side on Saturday morning. The boys went in to the game full of hope but unfortunately it just wasn’t to be their day. 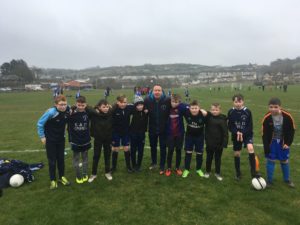 Codey Hutchinson got the consolation goal for Rossglass with a beautifully struck free kick, while Ryan Toner was the pick of County’s players. Despite the defeat, the young Rossglass team can be proud of their season, having shown significant improvement in the latter part of the year. A special thank you to Ronnie Gelston who sponsored the team for the match.

Rossglass County took two “Little Nipper” teams to Crusaders 2012s tournament, the largest in Northern Ireland organised by Irish Premier League side Crusaders. 32 teams took part from all over Northern Ireland. It was a great occasion for our little superstars most of them attending their first ever tournament. 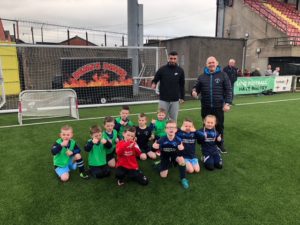 Excitement had been building for some weeks and our boys and girls couldn’t wait to get out there to play! They team even had a visit from Cliftonville’s Joe Gormley, top scorer in the Irish League this season to offer advice on how to hit the back of the net!

Rossglass entered two teams in the “red” and the “blue” development section and they did the club proud with both teams getting to the semi-finals. Unfortunately both just came up short in the end.

The older boys and girls had a fantastic tournament topping their group with a 2-2 draw with Irish League side Cliftonville, a 5-1 victory over Magherafelt Sky Blues and a final draw with St. Malachy’s from Belfast.

They came up against a strong East Belfast team in the semi final and despite dominating the game and taking an early lead they went down 3-1. East Belfast is becoming a bit of a bogey team after they knocked our Under 8’s out in the semifinal at the Glentoran Tournament earlier this year.

There was some terrific football played throughout and some cracking goals from Ben, Se and Conor. 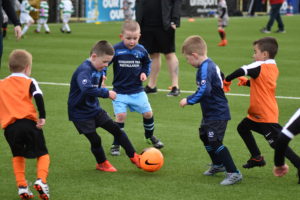 Our younger team also faced tough opposition with Carrick Rangers, Kilmore Rec and East Belfast in their group. Once again some outstanding performances from Eoin, Ethan, Daire, Tom, Aaron and Riley. Rossglass came up against CPS Ogs in the semi final and were dominant but with literally the last kick of the game they fell to a sucker punch! 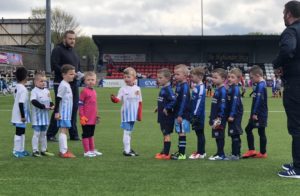 So disappointment on the day but one of great pride too. The boys and girls will learn from this experience and come back bigger and better next year.

The club would like to thank the children’s parents for all their support on the day, the coaches, Danny, Alex, Joe and Chris and of course Crusaders F.C for extending us the invitation and hosting such a well organised tournament.

To see some of our stars in action please have a look at this short video clip we put together. It’s well worth the watch! https://youtu.be/ofwWfTRsX0Y