Rossglass County Under 11s produced their best performance of the season to win by four goals to one over a luckless Tollymore United at Dunleath Park on Saturday and now look forward to the Shield Cup Final.

A fired up Rossglass team got this Shield Cup semi-final off to the perfect start when Ryan Toner stole in through the Tollymore defence to calmly put County one up.  Almost immediately after that Aidan Brannigan also found himself one on one with the Tollymore keeper before slotting home a second.

Rossglass continued to create chances with the best of these falling to striker Mark Curran who was working tirelessly up front. Curran fired narrowly wide following some great interplay between Codey Hutchinson and Aidan Brannigan down the right flank.

Just when it seemed that the floodgates might open, Tollymore mounted their fight back and it was a cracking goal that gave Patrick Hutchinson in the Rossglass goal absolutely no chance. That meant there was only one goal between the two sides at half-time and it was a nip and tuck affair after the break. The next goal was crucial and the County defence came under some pressure but KJ McCullough marshalled a the backline superbly thwarting numerous attacks.

At the other end Codey Hutchinson was terrorising the Tollymore defence as the diminutive attacker repeatedly found space down the left wing and it was from there that he cut in to clip the ball home from close range to claim the third and to ease Rossglass nerves. From that point on County dominated and it was rampaging midfielder Shay Curran who finally ended the encounter as a contest with a typically strong run into the Tollymore box before smashing the ball into the net to confirm County’s progression.

Well done Damien and all the boys.

Last Man Standing – We have a winner!

WE HAVE A WINNER (on points) LAST MAN STANDING!

After seven gruelling game weeks of our Last Man Standing competition we finally have a winner…but it was a bit of an anti-climax in the end. In our last week we had seven players left standing but as fate would have it all seven players went out! So we had to rely on the scoring system of points accumulated over the seven weeks to determine the winner.

“If more than one participant remains at the end, the accumulated ‘scored for’ of their selected teams will determine the winner. This also applies if during the competition the remaining players are knocked out in the same gameweek then the player with the highest score will be the winner.”

It was a close run thing, with just one point between the top two players.

And I can now reveal that winner of the prize fund was Kielty Hughes (Klippity Klopp) from South Armagh.

And boy did he take this competition seriously. In the final stages he was enquiring who everybody was, checking out the competition and studying all their previous picks. In fact when the results came rolling in over the weekend and men were dropping like flies he couldn’t hide his excitement.

The Rossglass County F.C Committee would like to thank all those who registered and played – for your support and your valuable contribution. It takes a lot of money to run a football club, so thank you for your donation! It is greatly appreciated.

And that brings me on to a few important thank yous…..to the guys who have no association whatsoever with Rossglass  County but kindly donated – a big thank you to you. You played from as far away as New Zealand, Los Angeles and the cosmopolitan hotspots of Derry, Newry, Belfast and Armagh.

To the players of Rossglass County, parents, coaches, committee members and I’m sure I have forgotten a few others we really do appreciate the time and effort you put in to make this club the success it is.

So 60 men started, 7 fell in the final week but we had to have a winner…that’s why we have rules so I’m told. We’ll be back in September with a new one, I know you all can’t wait and we’d appreciate it if you would sign up again. And we may even try to squeeze a World Cup competition in over the summer while we wait for the new season to start.

To learn more about our competitions please visit our fundraising page.

Rossglass County Under 6 Player of the week!

Troy picked up the Rossglass County Little Nippers Under 6 player of the week. Troy joined Rossglass County a little later than his team mates but he has slotted right in to the group. He never misses training and shows great enthusiasm for the game. He is making remarkable progress and his coaches have noticed how his dribbling and particularly his shooting has come on leaps and bounds. Young Troy is making huge strides and is sure to become a Rossglass star of the future. Well done young man!

If you want to more about Rossglass County junior teams or our “Little Nippers” please click here.

Rossglass County under 8’s returned to the small sided games at the Red High last Sunday. For the first time this year the team was captained by Keeley who did a wonderful job and kept all the boys in line. Though she may be a little quieter than some of the boys like a great captain she leads by example!

Keeley is a wonderful defender, a tough tackler who really marshals her defence. Under her guidance the team picked up three victories and one narrow defeat and that defeat was to a team Rossglass County lent one of our players to. So a wonderful performance by the team and by Keeley herself. It’s not surprising Keeley has already picked up the “player of the week” award this year. 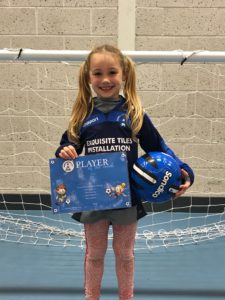 If you’re interested in learning more about our Under 8 team or our Little Nippers please check out our Mini Soccer pages and Junior teams. 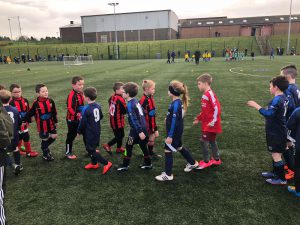 Rossglass County Under 6 Player of the Week is Tom!

Rossglass County Under 6 Player of the Week is Tom!

Tom is a naturally gifted left foot player with a powerful shot. Has a wonderful attitude, enthusiastic and a real hard worker in training.

Tom will be a key player for Rossglass County at the Crusaders Tournament at the end of April.

If you’re interested in learning more about our Under 6 team – check out our information page here.

Football Golf Anyone??? Under 15’s practice their footgolf!

Fresh from their season defining performance against league leaders Castlewellan in the cup semi-final victory, the Under 15 boys from Rossglass County enjoyed a well deserved break practicing their football golf at Downpatrick Golf Centre! 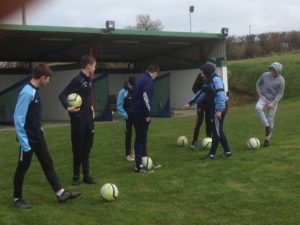 The lads had a great afternoon under the watch eye of their coach Darren Teggart, Downpatrick Golf Centre offers footgolf every weekend if you want to give it a try. It’s a lot more difficult than you think!