Rossglass Under 10’s (2008s) attended the Klubfunder Uhlsport Community Cup at Moyola Football stadium last night (Friday 31st August). Rossglass were in a difficult group with Academy teams from Ballymena United and tournament hosts Moyola FC as well as new outfit, Train to be Smart Jnrs, founded by ex-Man Utd player Pat McGibbon. The young County team got off to a slow start in the competition, legs still weary after a 2-hour bus journey, but gradually pulled themselves back into the tournament with some gifted play from Ryan Toner and Annie Montgomery in midfield along with some excellent goalkeeping.

The entire team put in tremendous performances, giving their all, beating Train to be Smart Jns 1-0 in their final league game to set up a semi-final appearance with Draperstown Celtic in the Shield competition.  Rossglass County were on the front foot for most of the game but without finding the breakthrough and it would take something special to break the deadlock. Fortunately, County got the win with a wonder goal from Cody Hutchenson who went on a long mazy run, beating fours players before coolly slotting home past the helpless goalkeeper. There was no time for Draperstown to reply and County’s Under 10’s were in their third final in as many weeks against Ballymena Allstars. 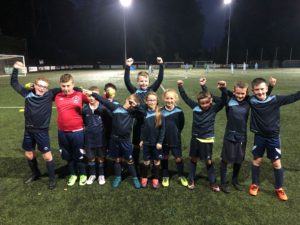 In a tense and very tight affair, Rossglass went 1-0 down when Ballymena’s centre-forward found space from a corner at the back post and tapped the ball home. County showed their fighting spirit and fought back to equalise in the last few minutes with Hutchenson once again finding the net and taking the game to penalties. Though County scored the first penalty and Ballymena missed theirs, two further misses from Rossglass meant heartbreak for the newly formed under 10s. However, It wasn’t all bad news as Cody Hutchinson won player of the tournament and bagged himself a brand new Uhlsport kit. The boys and girls of Rossglass didn’t go home empty handed as each received an Uhlsport mini skills ball along with other Uhlsport goodies.

It was a great team effort from all the kids and the improvement with each game they play is clear to see. More importantly, the kids had a fantastic time once again and did the club proud. As always thanks to the parents for their support, travelling all the way to Magherafelt to support the kids. 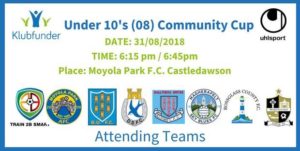 Rossglass County would also like to extend our thanks to Moyola Park AFC for hosting the tournament and inviting us to the Klubfunder Uhlsport Community Cup and  Klubfunder for extending the invitation to Rossglass County. Rossglass will be wearing Uhlsport kit this coming season. Check it out in our shop.