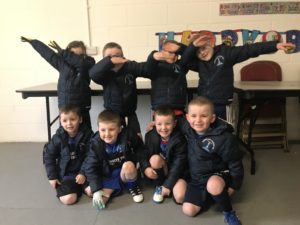 Rossglass County’s “little nippers” took to the field on Sunday as part of their continued football development. Too young for the small sided games at the Red High, Celtic Bhoys F.C have introduced a great new initiative to get our little ones playing football against other teams.

Five clubs took part in a three hour extravaganza on the 3G pitches at Downpatrick Sports Centre. Including ourselves and Celtic Bhoys there were also teams from Newcastle, Ballynagross and Crusaders from the Irish League.

The boys and girls of Rossglass thoroughly enjoyed themselves and our two teams turned in some fantastic performances. Conor Bradley, Ben Ford and Sé Tumelty had a field day in front of goals while Ethan Murphy, Tom Kelly and Fionn McCargo were steadfast in defence.

Due to the outstanding success of this initiative the “First Kickers” will continue at the start of each Month.

If you want to see just how much fun the kids had…just watch our video on the website or on our youtube channel and don’t forget to share it with your friends and family.