The seconds travelled to Bear Park in Newcastle to take on Tollymore in this McCall Division 2 clash. Having had a comfortable home win earlier in the season, Rossglass went into this full of confidence. However, with a strong wind behind them, Tollymore took the lead in the first 15 minutes with a shot from 25 yards. County keeper Stuart Traynor thought the ball was sailing way over the bar but at the last minute, a wicked dip saw it fly into the top corner leaving the County keeper red-faced.

But 10 minutes later, Traynor’s blushes were spared when his opposite number let in the most comical goal seen yet in the league. A cross into the box fell to the centre-half who tapped it back to his keeper.  It looked like it was a simple clearance but whether he took his eye off the ball or there was a bobble on the pitch, as the keeper attempted to clear the ball it simply rolled over his foot and into the back of the net.

Tollymore’s keeper however made up for this unfortunate mistake minutes later, when from a Ben Lennon free-kick just outside the box he dived the length of the net to tip the ball round the post. Rossglass kept pushing and finally took the lead from a beautiful worked moved on the left-hand side. 17-year-old Aaron McCarthy ran almost from the halfway line beating two defenders, cutting inside into the penalty box and unleashing a thunderous shot that hit the top right-hand corner of the net.  It was no more than County deserved with young McCarthy continuing to torture the Tollymore right back with his pace.  This forced the Tollymore manager Hall to bring their pacey right-sided midfielder back to mark him which meant there was more and more space for County’s left back Caolfind Rogan to run the ball out of defence and set up more attacks.

With the wind at their backs in the second half it was expected that Rossglass would dominate the rest of the game. However, a few strange decisions at half time from County manager McGarrity let Tollymore back into it. McCarthy who had a been a thorn in Tollmore’s side was put into goals which was surely a relief for their defence and a tactical switch to a 3 man defence saw County fall deeper and deeper which allowed Tollymore onto them. Tollmore took advantage from this and if it hadn’t been for some poor finishing they would surely have equalised hitting the bar on two occasions. However, against the run of play Rossglass extended their lead.  A foul on the edge of the box allowed Lennon who had a sighter free-kick in the first half to coolly pass the ball round the wall and into the corner of the net. County were 3-1 up and surely it was just a matter of seeing out the game.

As Tollymore continued to push, the game got a lot feistier with Tollymore’s red-haired centre half picking up a yellow card for a challenge on Rossglass midfielder Ryan Kearney. A second challenge on the same player only seconds later which went unpunished by the referee caused an uproar on the side-line with McGarrity having to be restrained from entering the pitch. Rossglass were rattled and Tollymore benefited from it when a loose ball in the County box caused panic among the defence. The usually composed Paul McGarry swung at the ball to clear only to slice it into his own net. Unfortunately for Tollymore there was no time left to get the equaliser. Rossglass made it tough for themselves but eventually ran out 3-2 winners.  There were notable performances from Kearney, Rogan and young McCarthy who will no doubt get a call-up to the first team very shortly if he continues to play the way he did in the first half.

The firsts were back in action last weekend with a home game against Ballynagross at Dunleath playing fields. In a very close fought affair at Dunleath, Ballynagross ran out 3-1 winners.  However, the scoreline didn’t reflect just how close this game was and the battling County side can feel slightly aggrieved to lose this very entertaining game.

In the opening minutes, County’s keeper “Cookie” McKinney was called into action when Ballnagross’s centre-forward sent in a curling effort that forced Cookie to tip the ball around the top of the right-hand post. Straight from the resulting corner Rossglass broke and almost got their noses in front when midfielder Chris Hamilton hit a thunderous shot that sailed narrowly over the bar. This set the tempo for the game and in the first twenty minutes, Ballynagross hit the post while County’s Ryan Tumelty seen his effort from a free kick on the right-hand side bounce back of the bar.

The game was fierce and competitive in midfield, with Oran Tumelty taking the brunt of some harsh tackles, but on 20 minutes it was Marc Burke who found himself in the referee’s notebook when he clattered his opposing number. This seemed to spark Burke into life. Shortly afterwards he found himself straight through on goal but as he was about to pull the trigger, the ball was nipped away from him. Both teams pushed for the opener but only for some great defending by both teams the scoreline could have been greater. Makeshift right-back Paul McGarry for County had an outstanding game in defence winning his tackles and distributing the ball with precision.

Eventually, the opener came just 5 minutes before halftime. Ballynagross forced a corner and in a scrappy melee in the box, it was tapped past the County keeper.

The second half was just as lively as the first and County came out the stronger. In what was probably the best move of the game, Barry Mageean picked up the ball in the left back position, passed the ball through the legs of the oncoming forward to Thomas Redmond at the halfway line who sent an equally exquisite pass through to Marc Burke running down the left-hand side.  Redmond’s pass split the Ballynagross defence and Burke fired the ball across the five-yard box where Ben Lennon at the back post was on hand to slot the ball past the helpless keeper. It was well deserved and you felt County could go and get three valuable points. Not to be outdone Ballynagross rallied and put pressure on County’s backline which eventually paid off. There was more than a hint offside about their second goal and despite the vociferous complaints, the referee was never going to change his mind. County pushed for the equaliser once again but against the run of play, Ballynagross hit the killer punch. Poor defending allowed one of the Ballynagross midfielders to run through unchallenged and get a clear shot on goal, curling a lovely shot into the top right-hand corner beyond the outstretched hand of McKinney.

A 3-1 defeat but if Rossglass County play the rest of the season like this they should start to climb the table. Next week the team travel to Carryduff where they will be hoping to pick up three points.

Rossglass County have a new kit sponsor for our senior team!

On Saturday, 2nd November,  Niall Mageean from Downpatrick Farm and Garden Supplies Ltd presented club captain Niall Mageean and goalkeeper Matthew McKinney with the teams new kit prior to their match with Ballynagross in the Newcastle Premier league. Also pictured is Niall’s son, five year old Dillon Mageean, who is a first kicker with Rossglass.

Everyone at Rossglass would like to extend a very big thank you to Niall for such a generous gesture. We value his support and commitment and thank him and his company for this very generous donation.

Downpatrick Farm & Garden Supplies is a family business specialising in the sales, service and repairs of all types of garden and farm machinery. They have been in this business since 1999, and have a wealth of experience in the garden machinery and agricultural environment. Based in Downpatrick, they have a large showroom stocked with all types of garden machinery. Please support them! 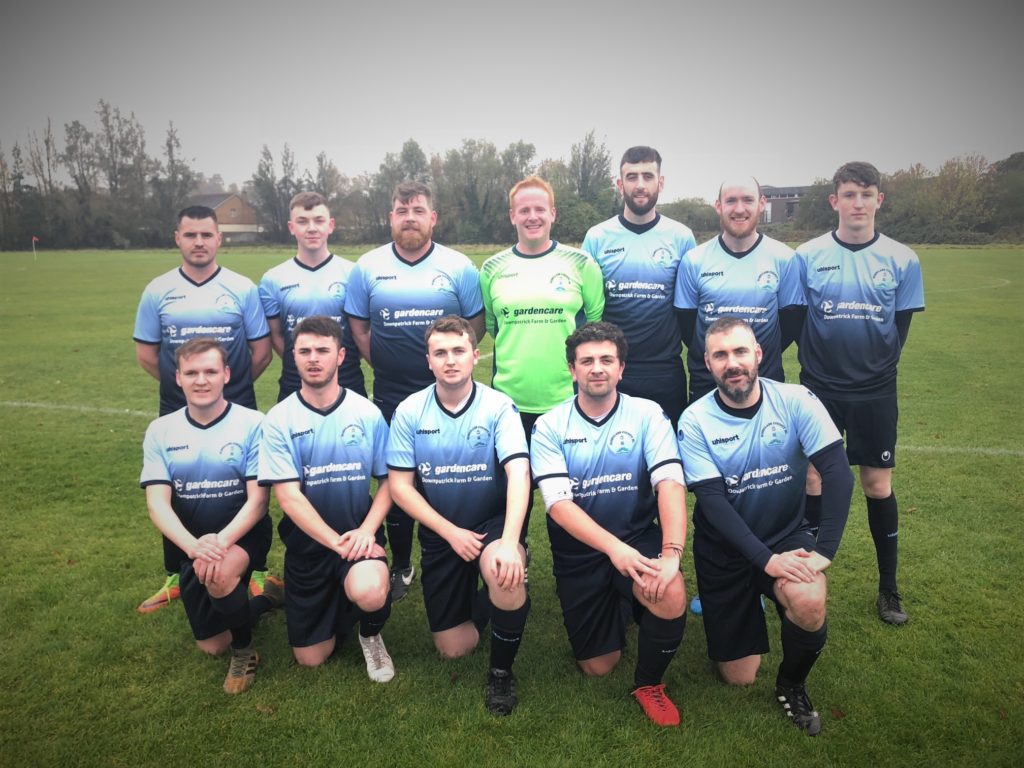