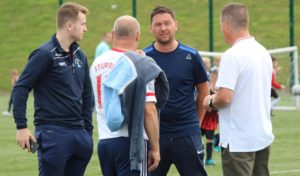 Darren Teggart has stepped down as coach of the seconds. The club would like to thank him for his dedication and hard work. He has worked tirelessly over the past two years to improve the second squad. However, Darren won’t be going too far from the team as he still intends to pull on his boots and play. He will also be continuing in his role as under 17 coach.

The new coach of the seconds is Daniel McGarrity, currently with the under 10s and the whole club wishes him the best of luck in his new role. Danny took the reigns on Saturday at home to Valley Rangers in the Newcastle & District Division 11. Great things are expected of McGarrity as he has some pedigree at this level having worked with Philip Campbell a few years back going unbeaten for an entire season.

However, McGarrity must have left the field this week scratching what few hairs he has left on his head as Rossglass who were 3-1 up at halftime somehow conspired to lose the game 4-3!

Rossglass fell behind early in this game to a soft goal. A long ball split the County defence and the Ranger’s centre-forward raced through to coolly slot home past Cookie McKinney in nets. Undeterred County fought back with new signing Eoin McEvoy impressing and bossing the midfield. The county team grew in confidence and their dominance finally paid off.  County’s centre-forward was in scintillating form. The gangly Marc Burke made goal scoring look easy – three times he was put through, one on one with the goalkeeper and three times he put the ball in the net. A hat-trick for young Burke, County were cruising and you just couldn’t see them losing this game.

However, it was a different story in the second half. Whether county thought the game was in the bag and complacency set in, but within minutes of the re-start, Valley Rangers were back in the game. A long ball to the back post went over the head of the County keeper finding an unmarked player who had the simple job of tapping the ball home. Confidence seemed to drain from the County players and in an effort to rejuvenate the midfield McGarrity made a number of substitutions. Chris Hamilton was replaced with Ryan Kearney who had a half valley fly narrowly over the bar, McEvoy had a few long-range efforts that unfortunately didn’t trouble the keeper and Burke had a penalty shout denied when he was barged over in the box. But apart from this, it was all Rangers in the second half and their pressure paid off, not only equalising but taking the lead with all the goals coming down the right-hand side. McGarrity will be praying that Paul McGarry missing due to an unfortunate incident in a local church last Friday will be back next week at left back for County.

A disappointing start to McGarrity’s reign, he’ll be hoping he can put things right at home to Ballynagross next week.